– How to Know if You REALLY Have a White Grub Problem

Q: So what are those white grubs, anyhow?

A: Grubs are NOT worms.  White grubs are larvae that will grow into beetles.

There are more than a half-dozen species of beetles that have a grub stage in their life cycle.

In Indiana, the beetles that have a white grub / larva stage in their life cycles include:

Q: My lawn had some grubs this spring. What should I do to kill these horrible insects?

A: Most people are caught up in the hype of killing every grub.

The truth is that most grubs do VERY LITTLE HARM, and it’s completely normal to have SOME grubs in your lawn.

Q:  What do you MEAN, it’s normal for me to have grubs in my lawn?

A. Almost every yard has grubs, and we’ve been hearing that there seem to be more grubs this spring than there have been for the past few spring seasons.

(NOTE:  There is not a universally accepted grub damage threshold among the expert scientists who study these beetles and their larvae, but if you read various studies on this topic, the range does seem to fall within 5-10 grubs per square foot.)

In the spring, the grubs that were in the soil last fall move up closer to the soil surface from their over-wintering location down a foot or two in the soil.

While the grubs do some spring-time feeding on grass roots, it’s rarely enough to cause enough damage that you’ll notice the effects on your lawn lawn. After a few weeks of feeding, the weather will warm the soil and the grubs will pupate about 3 to 6 inches from the soil surface.  The pupa will develop into adult beetles in May, June and July  (the timing for when they become adults depends on what kind of beetle they are since different beetles have different life cycles.) 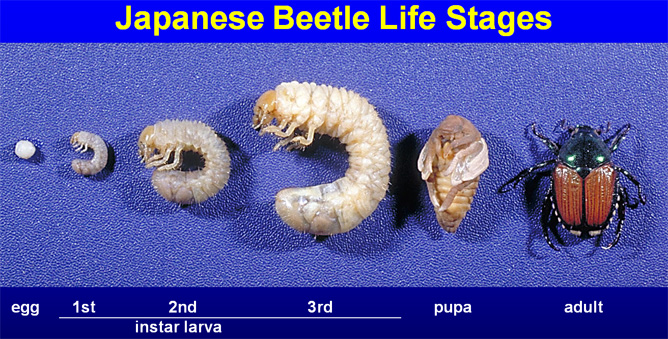 Lawn insecticides do not work well throughout the pupa or adult stages because the beetles are not doing a lot of feeding during these times.

The adult beetles fly around for miles, so killing off spring grubs will have no effect on how many beetles will fly in from elsewhere to lay eggs.  Again, different beetles lay their eggs at different times of the year.

Q:  But my Lawn Fertilizer Company says I need to kill these grubs in the spring.

A. Again, the presence of grubs in your lawn is normal, and is typically not harmful at all.

The real trouble starts when people are flooded with advertisements about grub-killing products that don’t tell the whole story.  Frankly, there are numerous insecticides sold in the spring that claim to give season-long grub control. For most people’s lawns, this just means that you are paying for a season of chemicals on your lawn that are simply not needed.

In fact, some of these chemicals will also kill beneficial insects that make their home in your lawn.

Grubs are not particularly susceptible to pesticides unless they are in a stage when they are feeding actively, so springtime is pretty much the LEAST effective time for white grub control.

In Indiana, the most-damaging grub stage occurs in late summer after eggs hatch and newly hatched grubs are aggressively feeding on turf roots throughout the summer and fall.   Therefore, wait until late-June to early July to apply a grub-control product. This will allow the insecticide to get fully incorporated into the soil to control the new grubs which are just hatching, are closer to the surface, and are more susceptible to the effects of pesticides.

Trying to treat grubs in the spring is pretty much a waste of time and money.

In fact, because, through the eyes of the average homeowner, the chemicals don’t appear to be working with springtime applications, there’s a tendency to over apply the grub-killing products, and that’s when excess chemicals tend run off into our water supplies, causing harm to human health and the environment.

Q:  But if I don’t kill the grubs, won’t they keep multiplying and getting worse?

A. There is no relationship of the number of grubs in your lawn from one year to the next.

If a lot of adult beetles are noticed in July (remember the threshold of 7-10 per square foot), then a treatment in August MIGHT be warranted.  Also, keep in mind that during wet summers, the beetles typically lay their so far apart in the grass that the grubs don’t do harm. On the flip side, during cool summers or very hot summers, grubs die from diseases and drying out, so again, very often treatment is not needed.

Q.  Why does my lawn have grubs, but my neighbor’s lawn seems grub-free?

A. Keep in mind that the adult stage of the grub life cycle is a beetle, and beetles can fly.

Random chance does play a role in where the beetles lay their eggs. Adult beetles like to lay their eggs in lawns will full-sun and plenty of soil moisture. The masked chafer beetle and Japanese beetle lay eggs in July, so if the weather has been dry but your lawn is watered and surrounded by dry lawns, it is a prime target for egg laying.

Q:  Look, I just don’t like the thought of grubs living in my lawn … I’d rather be safe than sorry.

A. Pesticides are powerful things that should only be used when necessary.

These chemicals can kill beneficial insects right along with the grubs you are trying to target.  Pesticides can also cause pollution. One thing for sure, the advertising for grub control insecticides has inspired the use of pesticides when they were not needed.

We urge you to consider the information in this post before resorting to using products that promise to make your lawn grub-free.

That said, there are circumstances where treating for grubs may warranted.

You might consider using a fertilizer with added grub-targeting pesticides, like the 15-0-3+IMI that we sell (+IMI means that the 15-0-3 fertilizer has an added chemical called “Imidacloprid,” a widely used and powerful insecticide that can also affect non-targeted beneficial insects.)